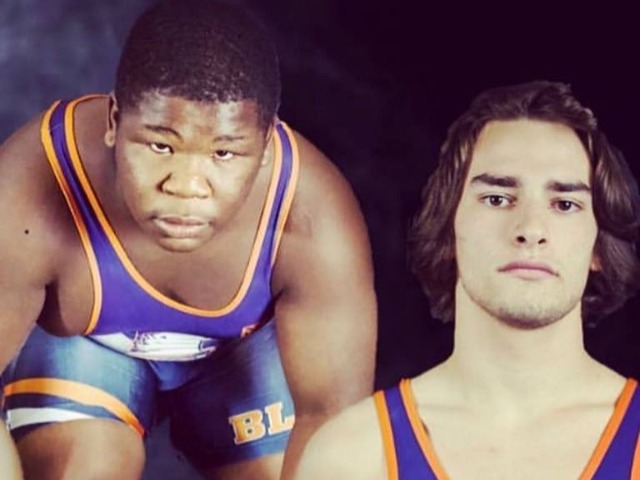 ALLEN, Texas – The 22nd NCWA Championships are a day away with one of the association’s largest national tournament fields in its history. The NCWA is back in Texas at the Allen Event Center for the sixth time with almost 500 wrestlers in the men’s and women’s divisions representing 78 teams from 30 states.

Blue Lights wrestlers Logan Perentis (133 lbs) and Khalic Everett (285 lbs) qualified for the nationals and will begin action on Thursday.

Defending national champion Liberty appears to be in position to repeat, which would be its third title overall. Right next to them, however, is The Apprentice School, which already took Liberty on in the Mid-Atlantic Conference Championships two weeks ago with the Flames taking the conference title again. Both teams are ranked 1-2 in the latest NCWA power poll, and it may take until the last matches of the tournament to decide a winner as it did last season when Liberty won by half a point.

Wrestling follows the teams' march-in at 9:50 a.m. Central time Thursday with Session I at 10 a.m. Session II follows at 6 p.m. There will be two separate sessions on Friday and Saturday as well.

Liberty and Apprentice each have a tournament-high 16 qualifiers competing. Liberty won the 2015 NCWA title as well, and Apprentice earned the 2009 title in the last season before the association split into two divisions for national championship scoring.

NCWA legacy members Central Florida and Grand Valley State are 3-4 in the latest poll and have enough qualifiers (UCF 14, GVSU 13) to challenge the top two. Grays Harbor College is also among the leaders with 14 qualifiers and is looking to make its best tournament run in three NCWA seasons. NCWA newcomer Schreiner may make a top-10 splash from its 13 qualifiers coming from its Southwest Conference Championship last month.

Springfield Tech CC, in its second men’s season in the NCWA, has 12 qualifiers followed by 11 by NCWA rookie member Big Bend CC (Wash.) and Mott CC. All of the above teams will compete in the Division I field. Washington State, which won the Division II title in 2015, should also be considered among the contenders with its 10 qualifiers.

In the Division II race, Connecticut and East Carolina appear to be in the best positions with 10 qualifiers each. The Penn State Wrestling Club, the defending champion, is also among the Division II leaders with seven qualifiers.

The NCWA will crown a new champion in its women’s division for the first time in eight years. Southwestern Oregon Community College, which holds the NCWA record for most consecutive national titles with seven, elected not to attend this year’s championships, leaving the field wide open. Grays Harbor College (Wash.) is the favorite to win its first women’s title and its first NCWA title. That would keep the NCWA title trophy in the Pacific Northwest. Only Yakima Valley Community College (three times) and Southwestern Oregon CC (seven) have won the NCWA women’s national title.