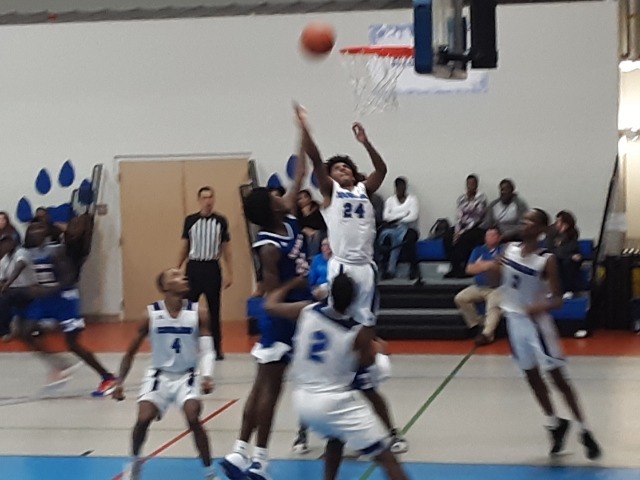 The Thoroughbreds used a relentless transition offense to jump out to a 15 point lead, 45-30, with about six minutes left in the first half, but the Cougars clawed back into the game to finally reclaim a one-point lead with six seconds left in the half. BLC's Anthony Hill, Jr. raced the length of the floor to land a layup with 1.4 seconds to play to end the half back on top, 59-58.

In the second half, CCCC (3-3) led by as many as eight points before the Thoroughbred transition began to take its toll in the final minutes.

"I let them have it at halftime," coach Mario Pharr said after the game. "We had gotten away from our offense the last three games, and we needed to start playing our game. We did that tonight."

The win was the first for BLC (2-3) against the Cougars in five tries.

Hill led the Herd scoring with 20 points. Devon Allicott claimed the first double-double of the season with 18 points, 10 rebounds, 2 steals and 2 assists. Kenny Anderson, Jr. finished with 16 points and JB Ezzell-Upchurch had 12.

Blue Lights' next game is Wednesday against the North Carolina JV squad at the Dean Smith Center in Chapel Hill. Game time is 5:30 pm.